Why Eastern Europe could become the new Silicon Valley

For a long time, Silicon Valley was considered the place with the world’s leading and most dynamic tech ecosystem. Especially for programmers and developers, the Bay Area was considered “the place to be” in the last decades. No wonder, since it is not only home to renowned companies such as Facebook, Google and a multitude of start-ups, but also to renowned venture capitalists (VC) who invest billions of US dollars in promising start-ups, helping them to achieve great growth, resell the companies and reinvest the capital. These conditions helped the metropolitan area to achieve a unique and worldwide reputation that continues to this day.

In the age of global digitalisation, however, innovation and technology are no longer tied to just one location. Other continents and regions have long had attractive locations that appeal to outstanding talent which they would respectively also train themselves. Europe, for example, has made a great leap forward in recent years. The continent has a large pool of well-trained developers.

In addition, the regulatory environment has changed and is leaning towards the needs of start-ups and tech entrepreneurs more strongly. Even politicians know: Today’s start-ups are tomorrow’s SMEs which need to be promoted and supported accordingly.

In the meantime, not only the traditional economic powers such as Germany, Great Britain and France yield growing tech communities, but Eastern Europe in particular offers attractive hotspots. A number of leading companies from the West or Silicon Valley have recognized the potential of the countries in question at an early stage: In 2005, for example, Amazon set up its first research and development department in the Romanian city of Iași. Google too has understood the ideal conditions and opened a campus in Warsaw in 2014 - according to Dealroom.co, the Polish capital incidentally is the largest tech hub in Eastern Central Europe – measured in terms of funding rounds.

From a VC perspective, there is much to be said for the Eastern European countries and their up-and-coming start-ups as well. For example, the good mathematics education of the former Soviet Union has created an environment that promotes the digital transformation of today: many very well educated mathematicians, physicists and computer scientists live in these countries. According to McKinsey, Central-Eastern Europe has the largest talent pool in the MINT sector (mathematics, computer science, natural sciences and technology). Slovenia, Poland and Lithuania lead the way: there are 20 MINT graduates per 1,000 inhabitants. An evaluation of the tech platform HackerRank shows that Poland in addition has the best developers. Also represented among the top 10 are Russia, Hungary and the Czech Republic. 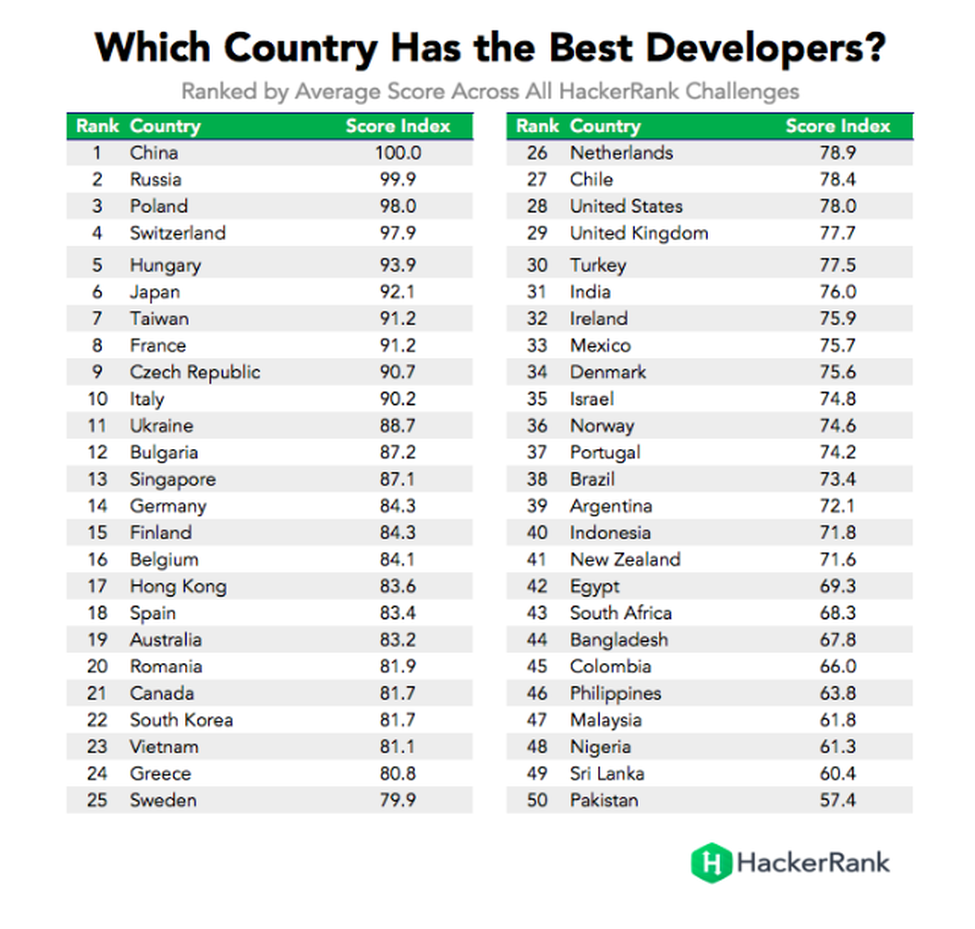 Furthermore McKinsey notes that the gender gap among MINT graduates is much smaller in Eastern European countries. While in France, Germany, Italy, Spain and Great Britain (EU Big 5) only 33 percent of women graduated in a MINT subject in 2016, Bulgaria, Croatia, the Czech Republic, Hungary, Latvia, Lithuania, Poland, Romania, Slovakia and Slovenia (Digital Challenger) showed figures as high as 40 percent over the same period. 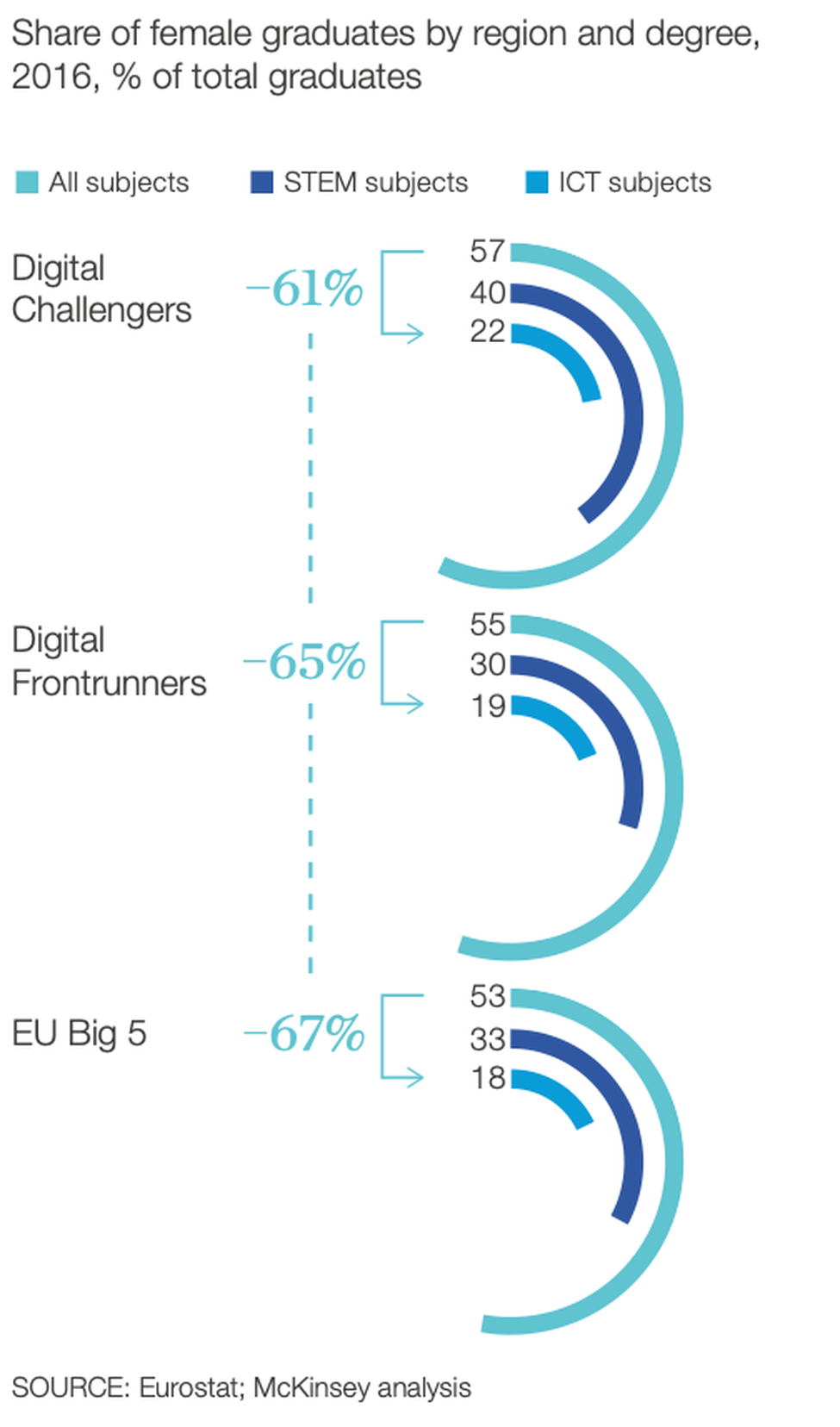 Future topics are already playing a major role in Eastern Europe too: countries such as Poland, Ukraine, Estonia, Belarus and Russia are leaders in the development of Artificial Intelligence. They receive the most international grants, win competitions and make major investments. Equally prevalent are topics such as Intelligent Data Analysis, Machine Learning, IoT, Marketing and Advertising as well as Computer Software.

Moreover our deal flow as well as our experience show that the universities in the Czech cities of Prague and Brno are particularly concerned with cyber security and voice recognition, while the academic institutions in Bratislava and Lake Cheb (Zalaegerszeg) in Slovakia have extensive expertise in the field of autonomous driving. In the Ukrainian and Russian cities of Kiev and Lviv and Moscow and St. Petersburg, on the other hand, research is very much concerned with blockchain technology, creating a general acceptance by many programmers who are working on blockchain solutions and making the region a cradle of this promising technology.

The obvious question therefore is why so little is known about the progress and knowledge of Eastern European countries in the above-mentioned fields in our part of the world. This largely stems from the fact that university research in Eastern Europe does not take place in academic publications to the same extent as in continental Europe or the USA, for example. For historical reasons, Eastern Europe is not as publication-driven as the West.

However, the success stories of start-ups such as UiPath or PicsArt have led to a stronger perception of Eastern Europe in the tech and start-up scene – this also applies to investors from the USA (and Canada). Their investments are mainly worth mentioning in 2017 and 2018. During those years, the VCs mentioned above have invested 200 million US dollars. The investors included VCs such as Sequoia Capital, Insight Ventures and Draper Associates.

Another fact that speaks for the region is that Eastern Europe has over 1 million developers, about half of whom live in Poland, Romania and the Czech Republic. But despite the good basic conditions in Eastern Europe, there is a catch: Unlike Silicon Valley, Eastern Europe is not a single large conurbation, but consists of more than ten different, dissociated places where start-ups have settled. In the Californian melting pot, the density is therefore much higher in addition to the tech community meeting at the same events which facilitates networking. In Eastern European countries, communities are mainly regional which makes it harder to connect with peers.

Nevertheless the question remains: How can the existing potential be harvested in such a way that young Eastern European have the chance to become the global players of tomorrow?

The answer: We need even better market access for foreign investors. This can be facilitated by an intermediary who has an appropriate network in Eastern Europe and is familiar with the respective investment mentalities.

As a European-based fund, capital300 is experienced and equipped with the necessary skill set to gap exactly that bridge by investing with Silicon Valley giants in order to jointly tap the potential of both continents.

Only through co-investments by European and US VCs, promising Eastern European start-ups with their talented teams are able to gain easier access to global markets and long-term growth.