Where is the European Silicon Valley?

Many years Silicon Valley has indeed been a global center for high technology, innovation, and social media. However, policies limiting new immigration in the country but more importantly prohibitive living cost, massively affect entrepreneurial-friendly conditions. Hence more and more insider recently voiced their concerns in The Economist, TechCrunch and Forbes and ask the question: Is the region losing some of its entrepreneurial magic?

Even though, entrepreneurs often take pride in explaining how they started in a garage, today’s reality is a different one. Living costs these days are often too expensive to bootstrap a company. Silicon Valley therefore seems to be a victim of its own success. Also there are other hot-spots emerging, for instance Shenzhen (China), which is home to Tencent, the company behind WeChat. Europe is in a great position to benefit from the reduced gravity and attractiveness of Silicon Valley, too. The continent has great talent and education, one third of universities ranked in the top 100. And with over €9b in grants provided by the EU there is plenty of (public) funding for fundamental research. According to Dealroom also VC funding is on the rise with over € 6b invested in Q1 2019.

We asked ourselves if there is any regional concentration, with cities like London, Paris, Stockholm and Berlin often perceived as the hot-spots of startup activity in Europe. In regard to absolute numbers theses cities are definitely leading. However, we also wanted to account for population to get a better understanding about density. Thus we looked at cities in Europe with a population of at least 100.000 and normalized core indicators like number of startups, scaleups, exits and received funding with population:

Top 20 cities, normalized by population (# per million, € per person)

The resulting “top” list by amount of startup, scale-ups, exits and funding from 2010-2019 reads differently. What jumps into attention are a lot of well known university and research cities topping the list, like Cambridge, Dublin, Oxford, Lausanne or Zurich. But there are also some more unexpected places like Reykjavik, Lund, Geneva or Luxembourg. 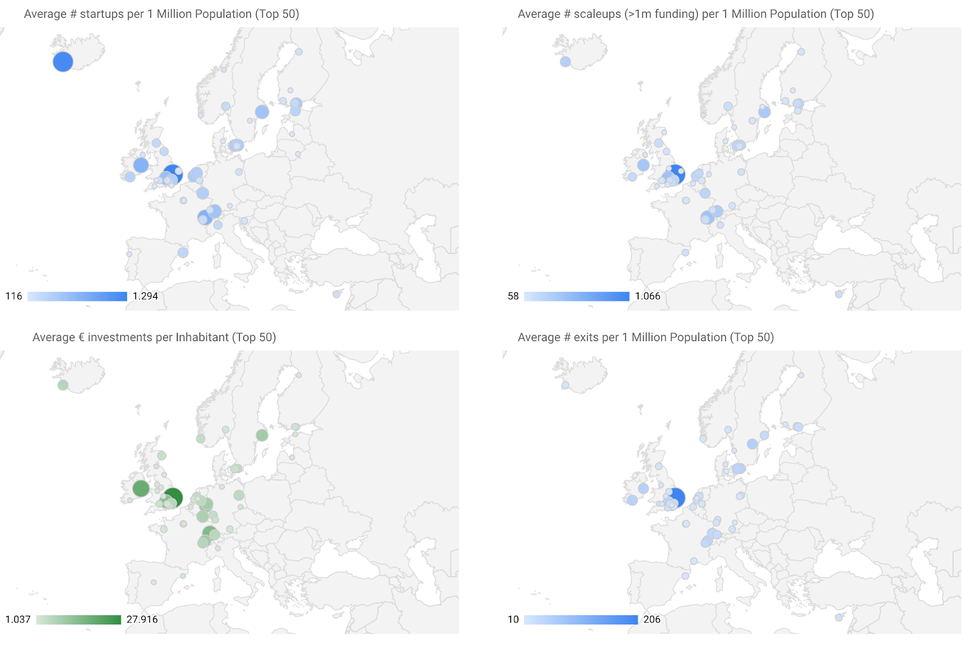 Top 50 cities by startups, scaleups and exists per million population and funding per inhabitant

We digged deeper into this investigating several regions focusing on continental Europe and less well known hot-spots. Based on 15 qualitative interviews with technology transfer offices, policymakers and incubators, 5 regions particularly stood out:

Summing up our research Europe is a very existing place to be a tech entrepreneur and investor, with a lot amazing talent that will apply their superior knowledge in amazing and game-changing products and services. While there is still a big gap in regards to startup-creation and funding compared to regions like Silicon Valley and Israel, certain regions in Europe are in a very good shape to become innovation hubs driving the next wave of technology creation and entrepreneurship.

Research by Peter Lasinger and Gerald Pollak. For more details feel free to contact us via office@capital300.com

Register Now
If you want to change the world, have a great product and are looking for expertise and funding to grow your business, reach out
Submit pitch
capital300.com uses cookies to improve your user experience and offer personalized advertising. More information and your opt-out opportunity can be found on our privacy page.